Mifuneyama Rakuen:a creation by the reigning lord Nabeshima Shigeyoshion a canvas of over 500,000 square meters.

Takeo during the Sengoku (Warring States) period. The Goto Clan, which had moved into the region from Kanto around the twelfth century, was on the rampage. Later, during the early 1600s (the start of the Edo period), when real power in Hizen Province (the area around present-day Saga) shifted from the Ryuzoji clan to the Nabeshima clan, the Goto Clan became a vassal and elected to take the Nabeshima name. While serving the main Nabeshima clan in the capacity of chief vassal as relatives of equal rank, the clan was allowed to autonomously govern Takeo, Saga Domain.

The most famous member of the Takeo Nabeshima family was the 28th lord of Takeo, Shigeyoshi Nabeshima (1800–1862). At the time, Japan was under a policy of national isolation, however Shigeyoshi was quick to focus attention on Western military and scientific technology, actively introducing “Dutch learning,” the study of Western sciences through the Dutch enclave in nearby Dejima, and successfully manufacturing Western-style cannon and steam ships. He also exerted a major influence on Naomasa Nabeshima (1814–1871), the tenth lord of the Saga Domain, who would later be hailed as one of The Seven Wise Men of Saga.

The Takeo lords resided in Tsukasaki Castle (Takeo Castle), which was situated in the location of present-day Takeo Senior High School. In the background stands the symbol of Takeo, Mt. Mifuneyama, at a height of 210 meters. The mountain is said to be named after Empress consort Jingu's mooring of her ship (fune) here on her return from Silla.

With the precipice of Mt. Mifuneyama as a scenic backdrop, Shigeyoshi spent some three years creating Mifuneyama Rakuen, completing his project in 1845 (Koka 2). The magnificent park features a path around a pond and covers an area of 50 hectares.
For the landscaping, Shigeyoshi invited a Kyoto-based Kano-school painter—a purveying painter to the Bakufu government from the Muromachi through the Edo periods—to create what we would now call a conceptional drawing. Because Shigeyoshi had taught himself how to paint in the Kano style and created a large number of works during his lifetime under the pseudonym Kaishunsai, there is no doubt that he would have been able to convey the manner in which he was envisioning the park in great detail. 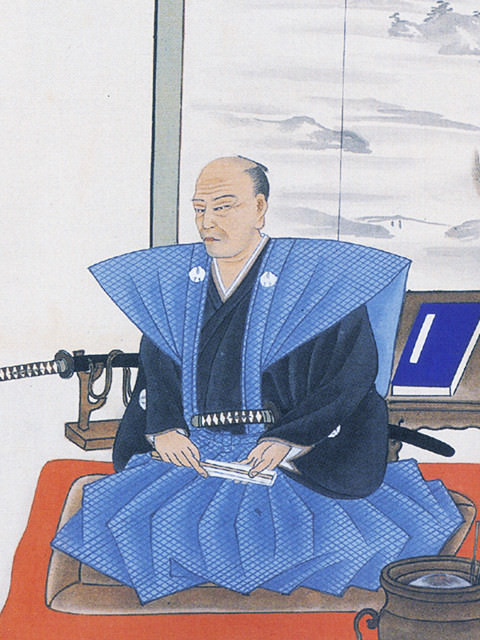 During the former part of his life, Shigeyoshi Nabeshima served as ukeyaku (administrative officer managing the affairs of the domain) and was responsible for budget reform for the Saga Domain. in 1832 (Tempo 3), he was dismissed from the position due to having severely warned Narinao Nabeshima, the previous lord of the Saga Domain, not to go to the capital because the domain lacked the financial resources.

Shigeyoshi returned to Takeo during the latter half of his life. In 1834 (Tempo 5), he became the first Japanese feudal lord to study Western gunnery and science and technology with Shuhan Takashima. Meanwhile, he was exerting a powerful influence over Naomasa Nabeshima, the lord of the Saga Domain, thereby being at the forefront of the development of advanced military and technical power for the domain at the end of the Edo period.

In 1839 (Tempo 10), Shigeyoshi retired, resigning as the lord of Takeo and relinquishing the position to his 7-year-old heir Shigeharu Nabeshima.

Mt. Mifuneyama, the symbol of Takeo.

Mt. Mifuneyama is said to have been named after Empress consort Jingu's mooring her ship (fune) here on her return from Silla, back in ancient times. Standing at a height of 210 meters, the mountain is the symbol of Takeo, Saga Prefecture.

The mountain is dear to the hearts of many people, also having appeared in school songs over the years. Standing there quietly, the beautiful Mt. Mifuneyama has a definite feeling of dignity.